Kanban is a way to visually organize Tasks by making the prioritization clear. Task is a piece of work assigned to responsible person (User) and required to be done as part of the whole duty. Kanban matrix allows managing every User’s Tasks according to sprint. Sprint is described as time length that is restricted to a specific duration with an accuracy of 1 day. Sprint is determined in Settings → Settings → General. Kanban is based on Tasks every User plans to, does, has done or cancelled in determined sprint.

1. Task is created and assigned to User. In Kanban every Task is visualized as rectangle with green / yellow or red colored edge.

2. According to planned start and finish dates of the Task, also sprint determined system depicts Kanban matrix: further User can manage his Tasks in current, previous, next sprints by marking Tasks as Not Started, In Progress, Done, Cancelled. Moves appear as soon as User changes status of the Task or simply drags it among the fields named Not Started, In Progress, Done, Cancelled.

3. With the reference to changes of statuses and recorded time, system automatically counts and submits hours of Planned, In Progress, Done Tasks of every User:

System also automatically counts the ratio of Tasks done on time and all Tasks.

5. It is possible to see Tasks according to various sections: Current Sprint, Previous Sprint, Next Sprint, All Tasks. By pressing tabs, system depicts the view. Also it is possible to organize the Task view by applying Filter.

Information provided in the Task card:

it is possible to get more detailed information in a wider view.

and to review added media by clicking media icon

4. If Task is behind the planned schedule: is late either to begin or end, at the bottom of the Task card you can see how many days the Task is late.

shows that Task is private and other users cannot see details of the Task.

Perform actions with a Task in Kanban window

It is possible to perform several actions with a Task in Kanban window without opening Task’s form:

2. Copy task: is used to make a copy of the Task. The Note and Media copies if the user turns on the Note → ON, Media → ON settings when copying a task.

3. Delegate task: is used to delegate Task to other users. After clicking Delegate task a list of possible users will be opened. Otherwise, it is possible to change Owner of the Task in the Task form.

4. Next sprint: is used to move Task to next sprint. After clicking Next sprint the Task will be moved to the first day of the next sprint. Note: this function is only available when status of the Task is Not Started.

5. Set related to: is used to change object that Task is related to.

6. Delete: is used to delete Task. 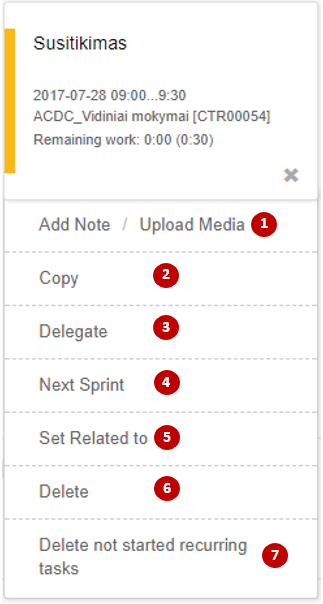 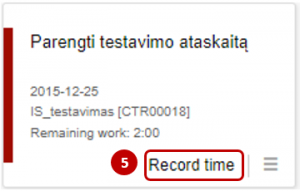 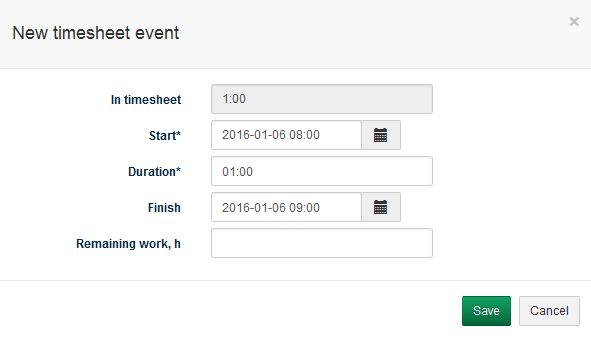 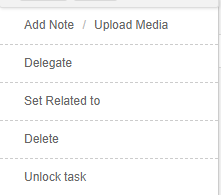 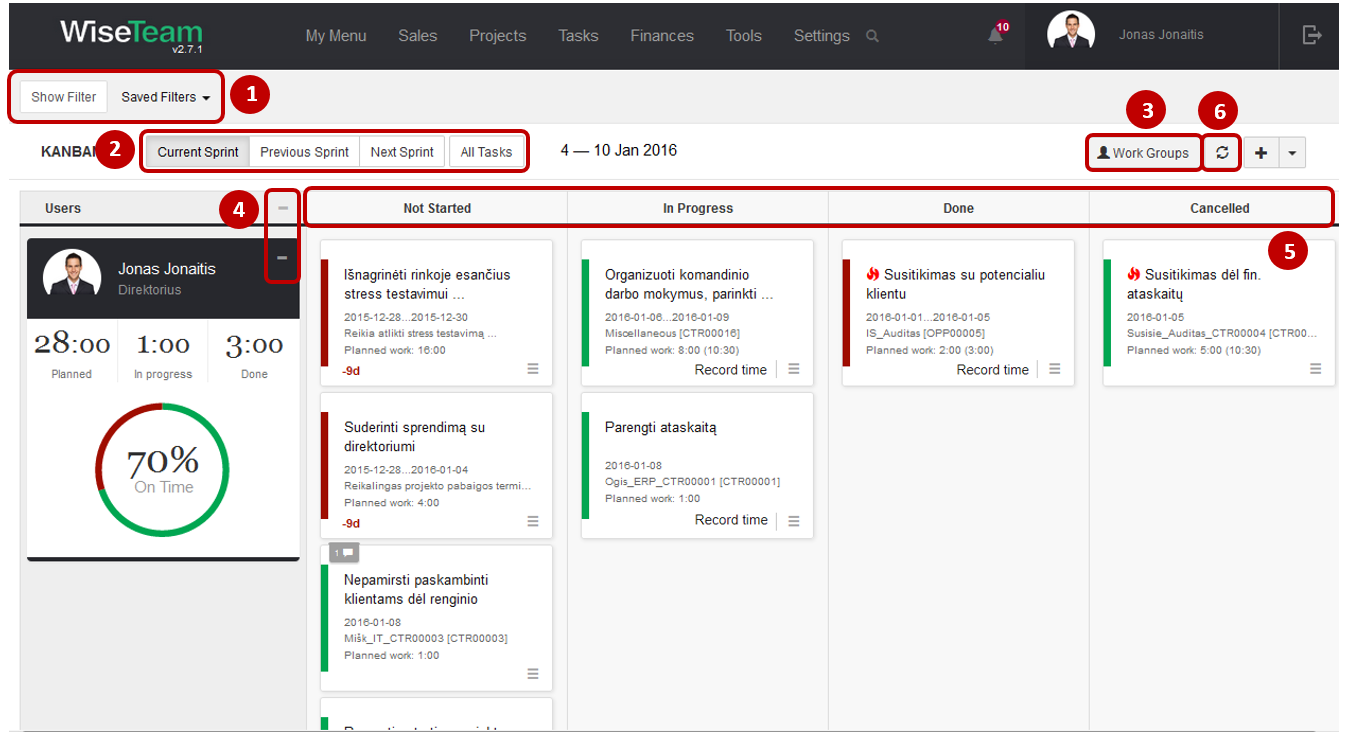 There are several possibilities to manage Kanban view:

1. It is possible to define and save filter that can be used to filter Tasks shown in Kanban.

2. If users are assigned to different Work groups, it is possible to choose which Work groups should be shown on Kanban.

3. It is possible to choose period (sprint) which Tasks should be shown: Current Sprint, Previous Sprint, Next Sprint, All Tasks.

4. It is possible to collapse Tasks’ view by clicking

in order to have generalized view. It is possible to collapse Tasks of one user or all users.

5. It is possible to collapse columns of the Kanban table by clicking on the names of columns. For example, if you do not need to see Tasks with statuses Cancelled and Done, you can collapse these columns.

in top right corner in order to refresh only the Kanban information.

To set which work groups have to be shown on Kanban follow these steps:

.
2. Choose which work groups to show on Kanban, define their order and click Save. 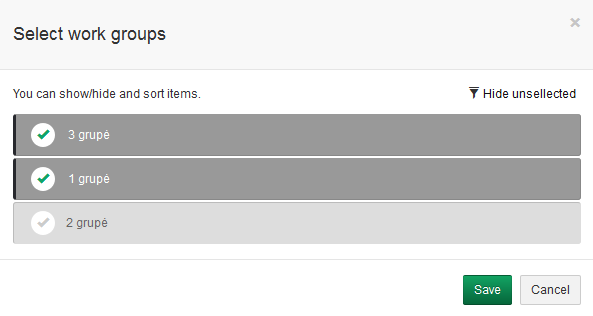 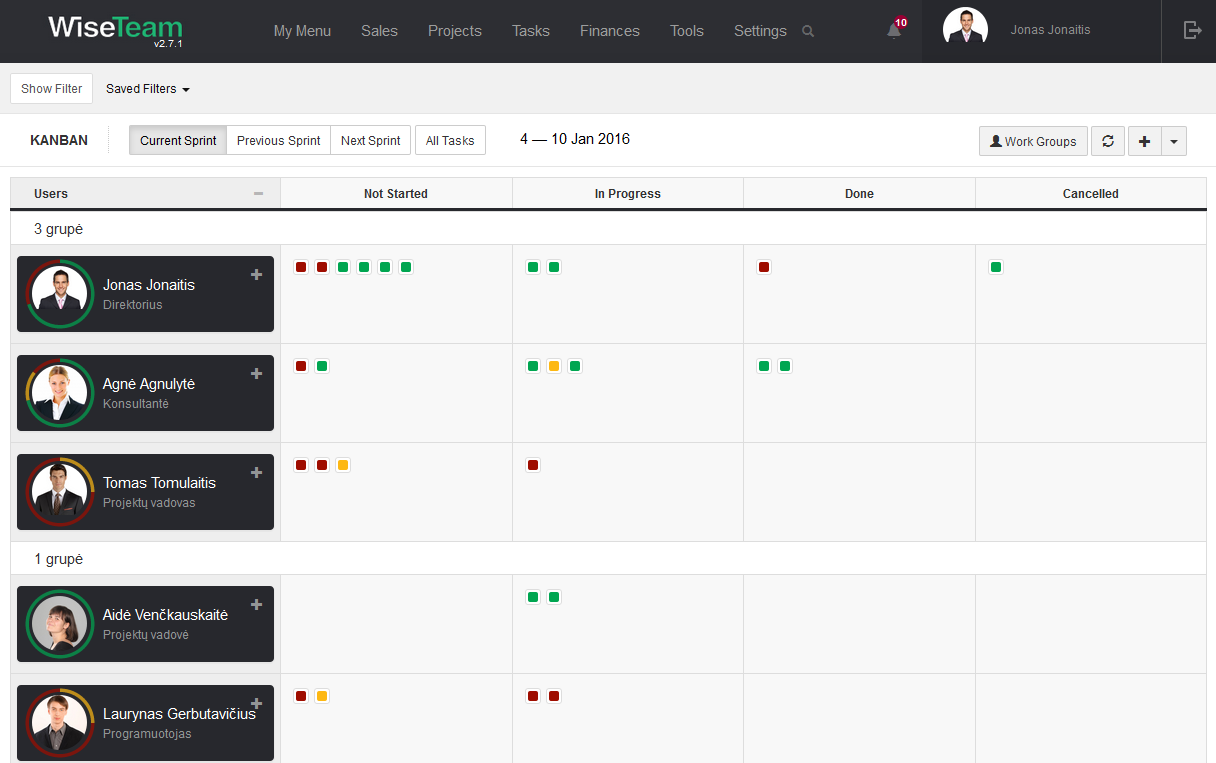 in top right corner, fill in Task information and click Save.

button to create a new Task related to one of the most frequently used objects within the last month. In this case, part of the new Task information will be filled automatically.

button there is also a possibility to start a process. Click

, select Process and fill in information to what Project and Activity Tasks should be related, select process template and date when process should start or finish. 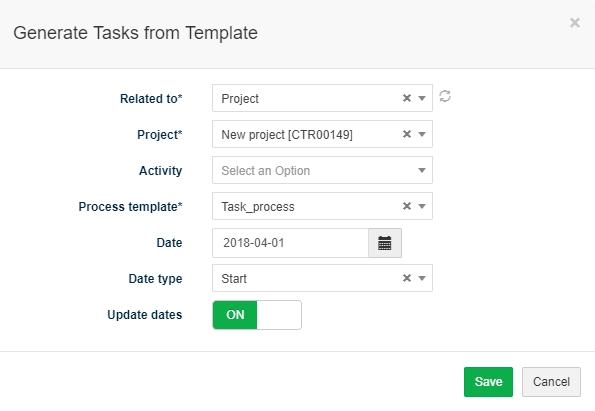